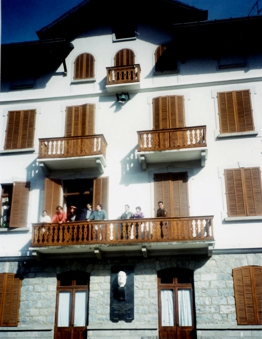 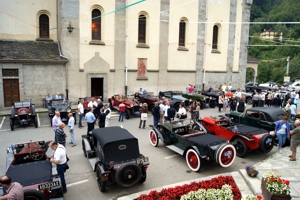 It was in 1995 when a few friends who were strolling around Fobello asked themselves, “Why don’t we form a Club to bring together the Lancia enthusiasts in Vincenzo Lancia’s Valsesia?” After a couple of meetings and a few sleepless nights the same friends went to draw up a Memorandum of Association for the Club. Under a clear starry sky, on 19th March 1995, the thirteen founder members left a solicitor’s office in Varallo having just  brought the Valsesia Lancia Story into existence.

Today the Club has about two hundred active members on its books,  a Head Office in Fobello and an operational office in Varallo.

The Club organizes various events, some of which have become traditions, such as the Spring Tour, Valsesia by Lancia and the “Bollito” Rally. Every year these events reveal, among other things,  new curiosities to the participants and new glimpses of the Valsesian territory.

On this site you will also find a special ‘Memories’ section which represents the events that best characterize the life of the Club.

However, the Valsesia Lancia Story is not only a record of the past, it is essentially the engine that keeps the story of the Lancia Family alive today; and this includes all the characters, with their grand or not-so-grand adventures, who have known, and those who still know, how to make Vincenzo Lancia’s creation great.

This website uses cookies to improve your experience while you navigate through the website. Out of these, the cookies that are categorized as necessary are stored on your browser as they are essential for the working of basic functionalities of the website. We also use third-party cookies that help us analyze and understand how you use this website. These cookies will be stored in your browser only with your consent. You also have the option to opt-out of these cookies. But opting out of some of these cookies may affect your browsing experience.
Necessary Sempre abilitato
Necessary cookies are absolutely essential for the website to function properly. These cookies ensure basic functionalities and security features of the website, anonymously.
Functional
Functional cookies help to perform certain functionalities like sharing the content of the website on social media platforms, collect feedbacks, and other third-party features.
Performance
Performance cookies are used to understand and analyze the key performance indexes of the website which helps in delivering a better user experience for the visitors.
Analytics
Analytical cookies are used to understand how visitors interact with the website. These cookies help provide information on metrics the number of visitors, bounce rate, traffic source, etc.
Advertisement
Advertisement cookies are used to provide visitors with relevant ads and marketing campaigns. These cookies track visitors across websites and collect information to provide customized ads.
Others
Other uncategorized cookies are those that are being analyzed and have not been classified into a category as yet.
ACCETTA E SALVA